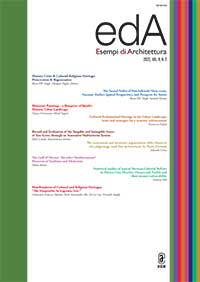 Varanasi, one of the sacred-heritage cities in India, manifests the cosmic symbolism in its planning with the form of multiple concentric sacred layers as territory. These sacred areas are being circumambulated by thousands of pilgrims during sacred periods of the Hindu calendar, where the Pañchakroshī pilgrimage represents one of these sacred cosmic layers in Varanasi. The pilgrimage route of Pañchakroshī covers 25 kroshas (55.2 miles, or 88.5km) distance with five sacred nodes which act as night-halt during the mass pilgrimage. This pilgrimage is traditionally being concluded in six days by stopping at every five nodes for a night. The five nodes of the route act as a threshold point where walking pilgrims take a break for the night and have the pleasure of ‘mundane’ and restart their sacred journey in the next morning proceeding towards ‘sacred’. The node consists of multiple dharmshālā (pilgrims’ rest house), one sacred water tank/ or hand pump, and one major temple to house the cultural-religious activity of pilgrims like cocking, eating, sleeping, gathering, listening to spiritual discourses, sacred bathing, worshiping, and associated activities. During the sacred month of pilgrimage, these five nodes become the most active points in the whole sacred route where the three separate entities rest house, sacred tank, and temple connect and work, reciprocally and interconnectedly. The vast openness of the temple complex with sacred tanks and holy trees altogether creates a contrast in the narrow route and courtyard-style rest houses within the node. The mapping of all five nodes will define the contrast and similarity inbuilt and open space. Identification of different typologies in build form according to their spatial character will further help in understanding the regeneration of these cultural religious spaces and making pilgrimage tourism more viable.