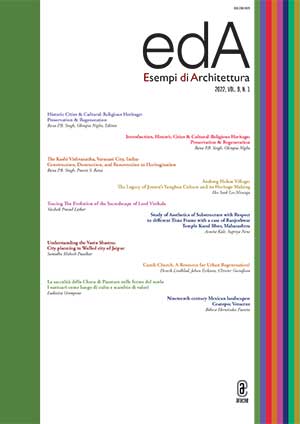 ABSTRACT This paper narrates a historical description of the Vishvanatha Shiva (Vishveshvara), the patron deity of the holy-heritage city of Varanasi (also called Kashi/Banaras)—how over time since its first reference in the 6th century BCE till date the temple has faced destructions, demolition, and contestation, but ultimately it reached to the phase of resurrection in 2019-2022. The main temple dated to ca CE 10th century was demolished by Aibak in ca 1194. Passing over time, in ca 1585-90 Narayana Bhatta (1514-1595), under the patronage of Man Singh, the king of Jaipur had re-built it again. However, in 1669, even this temple was demolished by the order of the bigot Mughal emperor Aurangzeb. Only a century later in 1780 by the patronage of Queen Ahilyabai Holkar (1725-1795) of Indore, the present temple of Vishvanatha was completed; and this temple typifies the revivalist idiom that spread across north India during the 18th century. By the 19th century, the whole area surrounding the Vishvanatha temple became the sanctuary of gods and godlings attached to Lord Shiva and his family. Through the ambitious plan of promoting heritage tourism under Smart City and Heritage Making programme, new developments are structured to superimpose ‘heritagisation’ under the umbrella of ‘Hindu Resurrection’ through making a model of modernised Neo-Hinduism. Recently, a plan for the revival of “Sacred Trail” (Pāvan Path) has been initiated on 24 October 2017, taking into consideration Vishvanatha Temple as the centre (axis mundi). On the 8th March 2019, projected as the ‘dream project’ of the prime minister Narendra Modi under ‘Smart City and Heritage-Making Programme’, started and already 315 houses and shops were razed to the ground, of course, most of them rehabilitated. On the vacant land, a huge complex of 50,000 sq metres, Kashi Vishvanatha Dham [‘Tirtha Kshetra’] Corridor has been developed; it was inaugurated by the Hon’ble PM on the 13th December 2021.